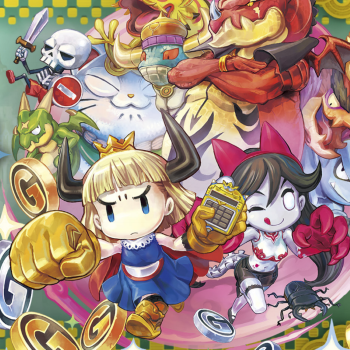 Penny-Punching Princess is a Beat 'em Up published and developed by Nippon Ichi Software. It was released on the Play Station Vita in Japan on November 2016, and on the Vita and Nintendo Switch in Europe on March 30, 2018 and North America on April 3, 2018.
Advertisement:

The game takes place in a world where money is the dominant force. As long as one has enough money, nothing can stand in their way.

The Player Character is a princess of a kingdom whose king died under crippling debt to the Dragoloan mob. Armed with a pair of golden gauntlets and a magical calculator, she sets off on a quest for revenge to destroy Dragoloan and its minions once and for all.

The Princess' calculator is the main gimmick of the game. By beating up enemies and taking their gold, the player can bribe enemies and capture them without a fight. If the calculator is used on a trap, the Princess can take control of it and use it against the enemy.