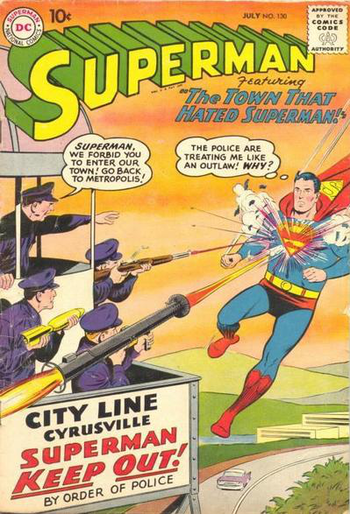 "This is a local shop, for local people! We'll have no trouble here!"
— Edward's catchphrase, The League of Gentlemen
Advertisement:

A Hero Walking the Earth comes to a community, often an Adventure Town that bears no welcome for them. They insult or otherwise mistreat the hero and consider them suspicious and worthless no matter what the hero says (also compare All of the Other Reindeer).

Well, the heroes can't have that, now, can they? So, they stick around, perhaps up to a situation that requires Training the Peaceful Villagers.

Then a crisis occurs, the hero saves the day, and the community is utterly flabbergasted that the hero would do that after how they treated him. When the town's speaker asks in astonishment why, the hero usually responds with something along the lines of "because it was the right thing to do", regardless of the community's opinion of the hero. The hero leaves with the community stunned that someone could honestly be that noble.

A variant used sometimes is when a fantasy creature protagonist, who is living in secret with a sympathetic human's help, enters a hidden community with the human friend. Suddenly the creature's kind is the majority and the human is detained immediately as an assumed enemy. Thus the creature protagonist finds itself in the unfamiliar position of having to publicly stand up for the human friend and reassure the population that the friend can be trusted. They are usually not convinced until the human plays a role in saving the day and is then officially considered welcome in the community.

If the hero isn't just passing through but happens to live there, they're a Hero with Bad Publicity who may find it hard to get Hero Insurance.