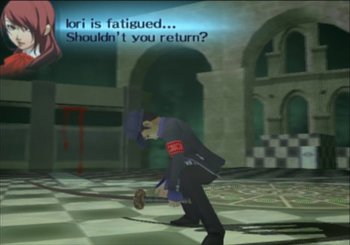 Your characters need to take a rest too...
Advertisement:

In just about any Role-Playing Game that has a level system, players will try to make the game easier for themselves via Level Grinding. Most games only gently discourage this, by simply making each level take longer to reach than the one before it, unless you're actually going through the game at the intended pace — in which case the requirements for gaining a level end up keeping pace with what you can get toward a level-up from the current enemies.

Sometimes, however, the developers decide that they really don't want you to level grind like that, so they'll put in more measures to prevent it. They may simply make it so hard to get your level higher than the one they want you at that even a dedicated level grinder would give up in disgust or resort to a cheat device, or they might make it actually impossible to level past a certain point before you get to the next part of the plot. This is Anti-Grinding.

The most common forms of this are escalating "experience to next level" values, where the higher your level goes, the more excessive the amount of experience you need to level up, and adjusted experience gains, where the amount of experience you earn for defeating an enemy is relative to your current level — a level 50 party curb-stomping some level 4 enemies would get a whopping 1 experience point for their trouble. Another option is to make enemies gain levels along with the player, so grinding an extra ten levels leaves you with enemies ten levels tougher, too. If the enemy also learns new attacks and powers as they level up, this could backfire on the player, making those Giant Spiders extra demonic. A few games (but not MMORPG ones) add a time limit to discourage excessive grinding so a player must go to next area / complete objectives within a certain amount of time. A common way to keep players from excessively grinding for money/resources as opposed to experience is to restrict what is available to buy/do with them until the story has progressed further, making gathering more than can be used at the current point in time pointless. Unfortunately, when these systems are balanced poorly, they can make grinding slower without actually making it less useful or important, thus causing players to spend more time grinding to get the same reward.

Compare Anti-Hoarding, measures similarly designed to prevent the players from indefinitely hoarding up items they obtain. See also Absurdly Low Level Cap, which is when a game makes it possible to reach the level cap without excessive or even any grinding at all, and Experience Penalty. Contrast Score Milking, in which there are no measures in place to deter players from excessive scoring and experience gains.