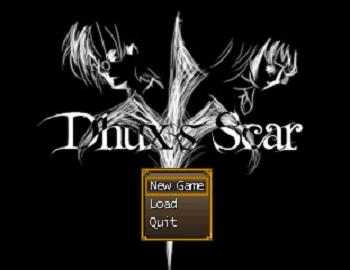 "I am Alpha, the beginning... AND THERE SHALL BE NO END!"
Advertisement:

La Cicatriz de Dhux / Dhux's Scar is a freeware RPG for PC, which was made by the Spanish developer Erilex in 2009 through RPG Maker 2000 and translated into English later the same year. It contains unorthodox battles and a deep and interesting story rife with religious overtones. Nothing is as it seems in Dhux's Scar; the plot will take so many twists and turns that sometimes it can be hard to keep up.

Once, an angel tried to overthrow God. But he was defeated, and his followers expelled from Heaven. His name was Dhux. God forgave him, but engraved a scar on his forehead and forced him to wander the earth, powerless and forever bearing the wounds he received. However, Dhux betrayed God's trust. Even without his powers, he used his guile and poisonous tongue to turn men against each other, causing wars that claimed the lives of thousands. Enraged by this, God cursed Dhux to be punished for all eternity. However, because Dhux is a divine being, he cannot be truly killed. Every 500 years, he is reborn, and the people are tasked with seeking him out and killing him.

So the story goes, but as one will soon find out, there's more to the story than it appears. The plot follows a weakling merchant called Elijah, a young girl called Celliann, and Faye, an androgynous bodyguard and old acquaintance of Elijah's. Faye is the only one of these characters that's really cut out for combat; Celiann is about as useful as you'd expect a little girl to be, and Elijah can only dish out real damage by using magical amulets that are in limited supply. (Even then, a single regular attack from Faye usually deals comparable damage)