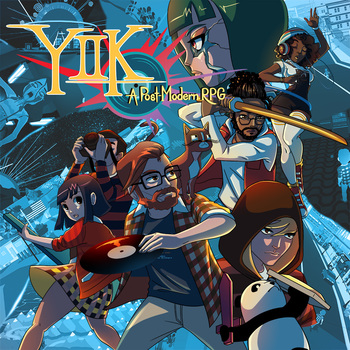 The needle of the record player has dropped... the sound that the world now hears will change the nature of all realities.
This is a story of what happens when you look for someone who can't be found.
Advertisement:

YIIK: A Post-Modern RPG is a role-playing video game released on January 17, 2019 for the Nintendo Switch, PlayStation 4, PlayStation Vita, and Steam.

Set in the 1990s, the story follows Alex Eggleston and seven strangers who came to know each other on the web and became the closest of friends, living their lives carefree.

Until the fateful day of April 4th, 1999, when a woman named Sammy Pak suddenly went missing.

That night following her disappearance, a video of her last known moments was uploaded online. All of the friends excitedly watched as she is pulled from an elevator by something otherworldly, and decide to investigate the truth for themselves. As he gathers companions seeking to resolve the truth behind her disappearance, Alex's search for the woman spirals into an epic quest with stakes higher than he could have ever imagined.