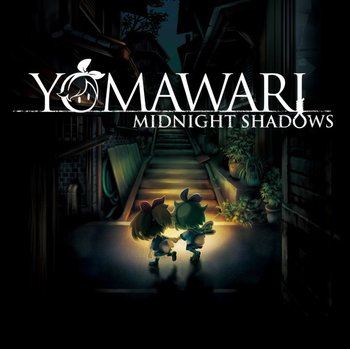 Yomawari: Midnight Shadows is a Survival Horror video game developed by Nippon Ichi for PlayStation 4, PlayStation Vita and PC. It was released in August 2017 in Japan and internationally two months later. It is the sequel to Yomawari: Night Alone.
Advertisement:

One fateful night, two girls, Yui and Haru, return home from a fireworks festival in the mountains. However, when Haru begins hearing voices, Yui offers to investigate, only to wind up missing. Worried sick for their friend, Yui and Haru travel through their town, hoping to reunite with each other. However, the town becomes a different place at night and the many malevolent spirits lurking about aren't going to make their journey easy for them.

A compilation port of both this game and Night Alone known as Yomawari: The Long Night Collection was released in October 2018 for the Nintendo Switch.

The series was followed by a third game, Yomawari 3, released on the Switch and PS4 in Japan on April 21, 2022. It's going to be released as Yomawari Lost In The Dark for Fall 2022.