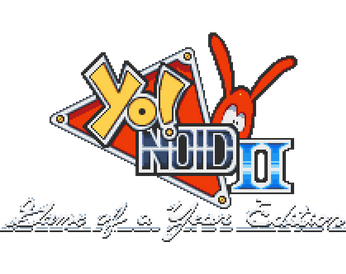 Yo! Noid! 2: Enter the Void is a Fan Sequel to Yo! Noid created for the New Jam City game jam in 2017. The game is a 3D platform game with wall-running and grappling mechanics with five large levels and a hub world.

The game starts when The Noid's yo-yo is stolen. After recovering it, he finds himself in the titular Noid Void, a strange place where pizza toppings and sauces are sentient beings. One of them informs Noid that their Heavenly Spire, a literal tower of pizzas, was stolen, and Noid decides to pursue the thief, recover the pizzas, and go home. There isn't much more to the plot without getting into spoilers.

. The soundtrack is also available here