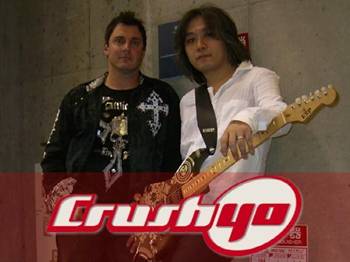 Now don't you worry
It's a never-ending story
Stand proud, let it out
Let 'em know
Let it show until they hear
Hear the Sonic Youth!
—"Sonic Youth"note no relation to the band by Crush 40
Advertisement:

Crush 40 is a Japanese-American Hard Rock duo known for its contributions to the Sonic the Hedgehog video game series, starting with Sonic Adventure.

The duo consists of guitarist Jun Senoue, a composer at Sega who had worked on such titles as Sonic 3 & Knuckles, Daytona USA Championship Circuit Edition, Sonic 3D Blast and Victory Goal, and singer Johnny Gioeli, frontman of Hardline and vocalist for Axel Rudi Pell.

The duo first teamed up to record "Open Your Heart", the ending theme of Sonic Adventure, credited under their own names; Crush 40 as we know it only came together to record the soundtrack to NASCAR Arcade as Sons of Angels, released on their first album Thrill of the Feel. Right after the game's release, the Swedish metal band Sons of Angels reunited, and Jun and Johnny changed their group's name with a combination of Jun's favorite soda and Johnny's favorite number.

Next, they appeared on the soundtrack to Sonic Adventure 2, with their Signature Song "Live and Learn", and provided two original songs each for the two games after that* "Sonic Heroes" and "What I'm Made Of..." for Heroes; "I Am... All of Me" and "Never Turn Back" for Shadow. After this time, their output was mostly restricted to covers. Many of their previous songs appear in Sonic Generations; the remix of "Open Your Heart" used there features electro house duo Circuit Freq. They have also recorded their own rendition of Sonic the Hedgehog CD's North American theme tune "Sonic Boom", featuring Synth-Pop group Cash Cash.

In 2009, they released a Greatest Hits Album, collecting remasters of their previously-released songs and a few exclusives, such as covers of "Un-gravitify" from Sonic Riders: Zero Gravity and The Cult's perennial hit "Fire Woman", plus the original song "Is It You".

They've performed least three times in the UK's Summer of Sonic festival. In 2011, they performed at the Sonic Boom E3 event in Los Angeles with Cash Cash. In July that year, they played their first full show in Tokyo, this time including such Hardline songs as "Hot Cherie", "Love Leads the Way" and "Everything". They also debuted the original "Song of Hope", released as a charity single for those affected by that year's tsunami in Japan.

Ever since then, they've branched out to more original fare, with the Rise Again and 2 Nights 2 Remember EPs.

In 2019, the band returned for their first original Sonic song in awhile, "Green Light Ride", which was used for Team Sonic Racing.

Their song, "Surfing on the Lava

" performed by Johnny Gioelli, was featured in the game Jitsu Squad, appropriately enough as the background score of a Lava Surfing stage.

Tropes that apply to Crush 40 include: