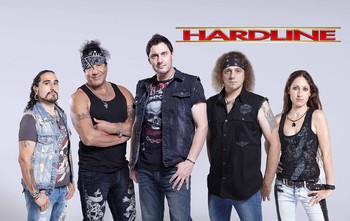 Hardline is an American Hard Rock/Heavy Metal band, it is the pet project of Johnny Gioeli (of Crush 40 and Axel Rudi Pell fame). Formed in 1991 by Johnny and his brother Joey, it started life as a Hair Metal band, and they released their first album, Double Eclipse, in 1992. A fairly standard melodic hair metal piece, Double Eclipse sported a sound straight out of The '80s. The album featured a cover of Danny Spanos' Top 40 hit "Hot Cherie", which became a modest radio hit. Notably, this album features Neal Schon of Journey on guitars. Due to the rise of Grunge, the album unfortunately didn't become very successful, and the band went mostly silent for about 10 years.

In September of 2002 the band released their sophomore album, II. This album, featuring a more traditional Heavy Metal sound and an almost completely different lineup, was followed by a live album, Live at the Gods Festival 2002. After this, the band went silent once again. Their next album came in 2009, under the name Leaving the End Open. This album was yet again a fairly radical change from the sound of its preceding album, albeit featuring the same musicians as II. This would have been Hardline's last hurrah, had it not been for one Alessandro Del Vecchio. A fan of the band, he wrote several songs with Johnny's voice in mind and, after recording some demos, sent them to him. Johnny liked the sound of these and immediately got to work writing another album, featuring Del Vecchio on keyboards. This album, Danger Zone, was released in mid-2012.

Johnny announced some time after Danger Zone's release that Hardline would be more active from then on. True to his word, a new album was released in October 2016—Human Nature sees Hardline dabble in power metal.

Overall, Hardline is a good band that was unfortunate enough to form at a time when their style of music was on the way out, and no one can properly say how far they would have gotten had they released their first album in the 80s.

Compare Danger Danger, another similar band that came in during the tail end of the Hair Metal scene and later had a member do music for the Sonic the Hedgehog series.

Tropes Applying to Hardline and their music