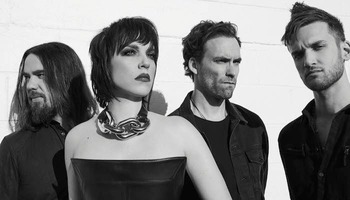 Their single "Love Bites (So Do I)" (from The Strange Case of...) earned the 2013 Grammy Award for Best Hard Rock/Metal Performance, making Halestorm the first female-fronted group to win the category.

Not to be confused with Alestorm, or literal hail storms.

Lzzy Hale also provided vocals for Lindsey Stirling's single "Shatter Me" as well as Stone Sour's cover of The Rolling Stones' "Gimme Shelter". She also did a duet with Eric Church for the song "That's Damn Rock n Roll" and did a cover of Ozzy Osbourne 's and Lita Ford 's "Close My Eyes Forever" with David Draiman for the band Device.