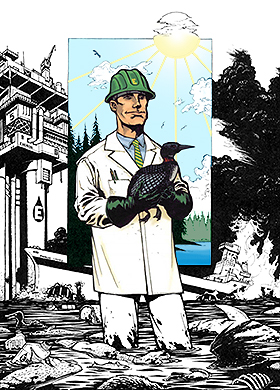 Protect the environment or there won't be one.
"If Grace is with you, look into her memories. See the world we come from. There's no green there. They killed their Mother, and they're going to do the same thing here. More sky people will come, they're going to keep coming like a rain that never ends - unless we stop them."
— Jake Sully, Avatar
Advertisement:

Any story with An Aesop with an environmental message which warns that unchecked pollution will either destroy the Earth or incur Mother Nature's wrath. Sometimes the message may incorporate Science Is Bad as well, though it is becoming more common to feature good scientists who encourage green technology and environmentally friendly lifestyles. It might also tell the sad story of one plant. Can be done with subtlety or done blatantly.

This was especially common in many kids' cartoons in the 70's and later in the 90's. Older examples tended to focus on pollution, newer ones on global warming, as the particular nature of society's environmental fears changes. In any case, however, the antagonists of the story will likely be Evil Poachers, Corrupt Corporate Executives (who likely work for Toxic, Inc.) or just Obviously Evil supervillains who pollute the earth For the Evulz. More subtle and nuanced Green Aesops also exist, however, as many of the examples seen below indicate.

Very rarely this will be used for a Framing Device, unless it's in the Edutainment genre.

This trope is actually Older Than Radio, having its roots in the Romantic backlash against the Industrial Revolution. In its earliest iterations, it went part and parcel with tropes like Arcadia, Ludd Was Right, and Science Is Bad. While, as noted above, more modern works employing the Green Aesop will usually avoid the outright anti-science message, they still tend to call upon the old Romantic themes to some extent or another.

So-called because green means nature in general and environmentalism in particular.

See Nature Is Not Nice, what nature exactly is. Compare with In Harmony with Nature. When done in song-form, it's an Earth Song.