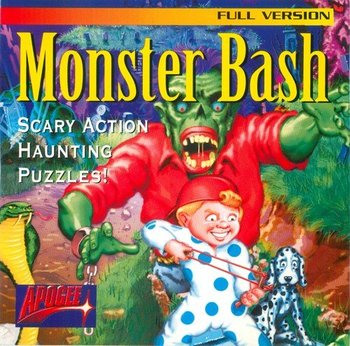 Monster Bash is a sidescrolling Platform Game, released by Apogee Software for the PC in 1993. The game stars 10-year-old Johnny Dash (Probably no relation to Johnny Cash) on a quest to rescue his puppy, Tex, from the evil Count Chuck, who plans to turn all the pets of the Day World into monsters. Armed with only a slingshot and an endless supply of rocks, Johnny must travel through 28 levels of undead horrors.

. No relation to the pinball machine Monster Bash or any virtual re-creations of it, nor to the coin-op game Monster Bash (1982).

On October 29, 2021, Emberheart Games released Monster Bash HD, a full remake of the 1993 game with enhanced visuals, achievements, and a level editor, among other new features.