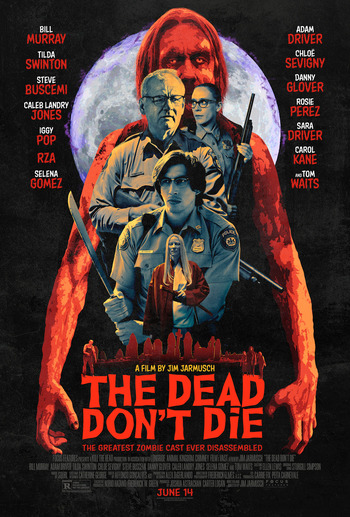 The Dead Don't Die is a 2019 Zombie Apocalypse film written and directed by Jim Jarmusch. It features an All-Star Cast.

After a vague sci-fi Excuse Plot causes the dead to rise again, three cops set out to kill some zombies. There's also a nerdy cashier, a delivery guy, a samurai mortician, some teenage hippies, a trio of kids in juvenile detention, and Hermit Bob, among others. Are they important to the plot? Kinda.

Not to be confused with the short story of the same title by Robert Bloch, or its 1975 Made-for-TV Movie adaptation.