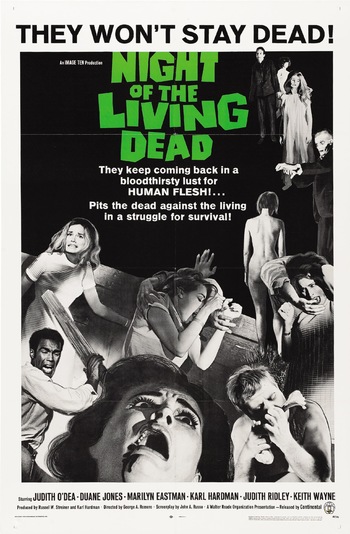 "They're coming to get you, Barbra!"
— Johnny
Advertisement:

Night of the Living Dead is a 1968 horror film directed by George A. Romero, who co-wrote the screenplay with John Russo. Romero's first feature film and the first entry in the Living Dead Series, it became one of the most influential horror films ever made, while inaugurating the Zombie Apocalypse subgenre in the process.

Prior to Living Dead, zombies had traditionally been depicted as creatures of voodoo who obeyed their masters. Romero did something completely different: He offered no explanation for their existence (save a speculative hand wave about an exploded space probe and radioactive fallout), gave them no masters, and endowed them with an insatiable appetite for the flesh of living creatures. His Flesh-Eating Zombie creation has since become synonymous with the word "zombie" in popular culture. Romero also commented on the increasing tensions manifest in American society in The '60s—as the film demonstrated, people had as much to fear from each other as they did from zombies.

This film is in the Public Domain despite its relatively recent vintage due to a screwup. In 1968, U.S. copyright law required a properly displayed copyright notice in order for a work to properly secure and maintain its copyright. While this film did display such a notice on the title frames of its original title—Night of the Flesh Eaters—the initial distributor, The Walter Reade Organization, neglected to place a copyright notice on the title card after it became Night of the Living Dead. By the time the filmmakers noticed the oversight, they could do nothing about it. As a consequence, anyone with the resources to distribute the film can do so without legal repercussions; this means you can legally view or download the film for free on Internet sites such as the Internet Archive

After Night of the Living Dead became an unexpected success, Romero and Russo discussed making a sequel; after disagreeing on the direction it should take, they each decided to do their own version. Romero made the equally-successful Dawn of the Dead and not-quite-as-successful Day of the Dead. Russo took more of a Black Comedy approach with the Return of the Living Dead pentalogy, which single-handedly introduced the concept of zombies eating brains. Both series have modern sequels: Romero directed the fourth film of his franchise (Land of the Dead) in 2005, then made a quasi-reboot (Diary of the Dead) and its sequel (Survival of the Dead), while Russo's Return of the Living Dead films strayed from the "comedic" angle to Gorn. In 1999, Russo—again without Romero's involvement—re-edited the original 1968 film for a 30th anniversary release, incorporating newly-shot footage and a new music score. This altered version received its own sequel, Children of the Living Dead, in 2001.

All three films in the original Living Dead trilogy have received remakes, each with varying degrees of success. Romero himself wrote and produced a faithful remake of Night in 1990, with his close friend Tom Savini directing. Night also received a second remake, filmed in 3-D, in 2006, although Romero had no involvement with this version, which departs fairly radically from the original film. In November 2018, it was reported that a direct sequel to the 1968 film (adapted from an unproduced script written by Romero and Russo) had entered development, but nothing has been heard since.

Night of the Living Dead remains one of the most iconic horror films of all time. Numerous movies, television shows, video games, books, and comic books owe their origin to this pioneer of zombie horror. And you know you made an excellent horror film when Mister Rogers, of all people, thinks of it as a fun movie.

Night of the Living Dead contains the following tropes: