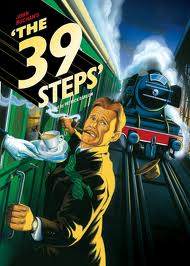 The 39 Steps is 2006 comedic play which adapts the 1935 Hitchcock thriller The 39 Steps using a cast of only four actors. To give an idea of the style, the Forth Bridge train is a model train on a track at the back of the stage and pretty much everyone plays at least a dozen roles.