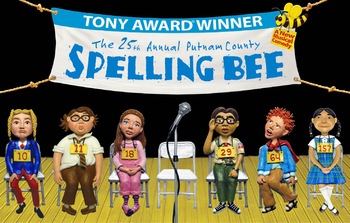 At the 25th Annual
We've memorized the manual
About how to spell these words
Words that require thought
People think we're automatons
But that is exactly what we're not
Advertisement:

The 25th Annual Putnam County Spelling Bee is a musical about six misfit kids in a spelling bee and the three crazy adults in charge. The music was written by William Finn and the book was written by Rachel Sheinkin. A later Broadway musical in 2005 opened to excellent reviews and several Tony awards.

The Broadway shows had unusual amounts of Audience Participation- a half hour before the show starts, four real audience members are picked to spell in the bee, for example, and characters will single out age-appropriate audience members as their "families." Often, an improvisational comedian is picked to play the official pronouncer, and comes up with increasingly hilarious and strange examples when asked to use the word in a sentence.

The six kids, in order of appearance, are:

The three adults are:

This musical contains examples of