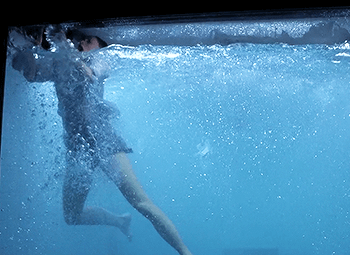 Dr. Drakken: First, you will be sealed inside a reinforced, titanium box. Next, you will be dropped into this bottomless chasm. Then, the chasm will be filled with water. Then, man-eating sharks and a giant squid will then be released into the water!
Shego: Huh? Wait — if the chasm is "bottomless", how can you fill it with water?
[Beat]
Dr. Drakken: IT'S VERY VERY DEEP, ALL RIGHT?
— Kim Possible, "Hidden Talent"
Advertisement:

Slightly less perilous than a Lava Pit or Shark Pool but menacing nonetheless, the victim is Locked in a Room that is slowly filling with water. Could be accidental — like being sealed in a room with a busted water pipe — or an insane individual with a penchant for drama could have locked them there as cheap entertainment. Either way, the Big Damn Heroes better bash the glass wall or shut off the water before it's too late.

Another variant involves the villain placing the hero inside some kind of non-buoyant container, a steel drum, vehicle, etc, and then tossing that into a large body of water. If the vehicle is a car, it's Trapped in a Sinking Car. Compare other death traps and Cement Shoes. May overlap with Water Torture. See Rising Water, Rising Tension for situations where the MacGuffin has to be secured from a place slowly drowning in water. May end in someone Opening the Flood Gates.

Not to be confused with the band Drowning Pool.

Wolf takes the kids to a special cell in the prison with a glass wall open to the water called the "Underwater Coffin". When the tide came in, the cell would flood and drown the convict.

Wolf takes the kids to a special cell in the prison with a glass wall open to the water called the "Underwater Coffin". When the tide came in, the cell would flood and drown the convict.