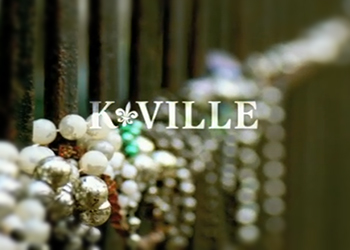 Surprisingly, Mardi Gras never even gets alluded to outside of the theme song.
Katrina brought out the worst in some people. But for the most part, it brought out the best.
Advertisement:

K-Ville was a live-action police drama made by 20th Century Fox. It aired from September 2007 to December 2007.The plot follows two police officers, the longtime New Orleans resident Marlin Boulet, who refuses to leave the city after Hurricane Katrina, and his new partner Trevor Cobb, a new arrival with a mysterious past and a buried secret, as they try to keep the peace in Post-Katrina New Orleans.

Though it was slated to run for one thirteen episode season, only ten of those episodes were ever produced due to the writers going on strike. An eleventh episode, "Game Night", was announced, but never produced.

All ten episodes are available for free through Hulu and Xfinity through TV.com http://www.tv.com/shows/kville/

. There has yet to be a DVD release.