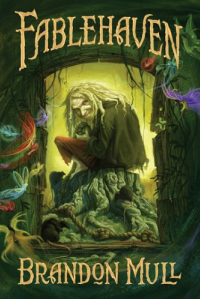 Fablehaven is a fantasy book series by Brandon Mull. It's kinda like Harry Potter... except it's set in America, there's a Supernature Preserve instead of a Wizarding School, the two main characters are siblings instead of friends, and it replaces the Nightmare Fuel of the Death Eaters with the Paranoia Fuel that is the Society of the Evening Star. So never mind.

... Maybe we should start from the beginning.

The intelligent and measured Kendra Sorenson and her knuckleheaded younger brother Seth are shipped off to spend the summer with their paternal grandparents after their mother's parents are killed in an accident. (Part of their grandparents' will stipulated that a portion of their money be used to send their children on a cruise as a "parting gift.") Reeling from the loss, they don't expect to enjoy the trip much, but are pleasantly surprised to discover that their other grandparents live in a spacious mansion. They've also got a garden filled with more birds, insects, and flowers than anyone they've ever met. But after sipping some of the milk left out for the "birds," they learn the truth: The "birds and insects" are actually fairies! The milk enables them to see them in their true forms. Their grandfather reveals that they are actually caretakers of a wildlife preserve for magical creatures named Fablehaven. It's filled to the brim with colorful fairies, witty and snarky fauns, Gentle Giant golems, and a couple of dangerous giants and trolls. Grandpa, along with his assistants Dale and Lena, offers to show the two siblings around the preserve, and begin to teach them the strange and exiciting ways of the magical reserves.

Then everything goes to Hell.

A witch named Muriel nearly unleashes a demon and overthrows the preserve, and the Fairy Queen turns Kendra into an honorary fairy to save her life. But that's only the beginning of the trouble. There's an Ancient Conspiracy called the Society of the Evening Star out to overthrow Fablehaven—and all the other magical preserves—in search of five magical artifacts of immense power, which together make a key to open up a prison full of demons and blanket the world in darkness. They possess infinite patience—they'll spend thousands of years building up their credibility in one place before making a move—and a nearly innumerable number of moles, which pop up in unexpected places. Kendra and Seth, having been dragged into the mess, must quickly discover a new way of life: Nowhere is safe. No one is trustworthy. Anyone Can Die, and anyone can turn on you. The Society possesses near omnipresence, and can pop up to get you at any second. To make matters worse, most of the "magical creatures" quickly reveal themselves to be true animals (or very alien beings), and are nowhere near gentle dewy-eyed beings they are in most fairy tales.

Death and the Society await around every corner. Will Kendra and Seth be able to work with their friends and prevent demons from destroying the world? Will they even survive?

A sequel series, Dragonwatch, consists of: