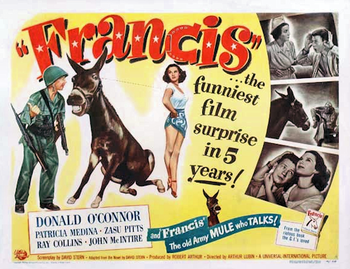 Francis the Talking Mule was a mule character who became a celebrity during the 1950s as the star of seven popular Universal-International film comedies.

Long before Mr. Ed, the talking horse who ruled America's TV screens, another talking equid won over audiences with his sassy comebacks and helpful demeanor. Francis the Talking Mule, usually voiced by actor Chill Wills, helped his bumbling sidekick Donald O'Connor out of humorous situations in a popular series of movie comedies in the 1950s.

All told, Francis made seven features for Universal Studios between 1950 and 1956. In Francis (a.k.a Francis the Talking Mule) (1950), his screen debut, the chattering mule rescues a soldier (O'Connor) on a secret mission in Burma during World War II. The second feature, Francis Goes to the Races (1951), involved him in shenanigans at a horse track. Francis Goes to West Point (1952) was a collegiate comedy with an exciting climax set at the annual Army-Navy football game. Francis Covers the Big Town (1953) depicted O'Connor as a newspaperman saved from a murder charge by a heroic Francis. Francis Joins the WACs (1954) had O'Connor rejoin the military, with the babbling burro in tow. The next year's Francis in the Navy was O'Connor's last film in the series, a seafaring romp that also featured a young Clint Eastwood. The final film in the Francis series was 1956's Francis in the Haunted House. Mickey Rooney took over for O'Connor in the sidekick role, while Paul Frees assumed the voice of Francis. The horror comedy had Francis frustrating some art forgers.

Tropes in the Francis series: