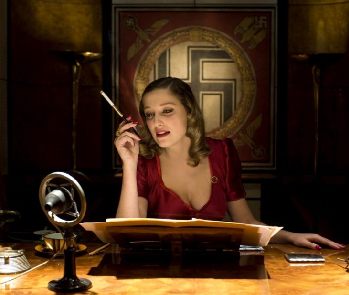 A wartime broadcaster who transmits propaganda to the enemy in order to undermine their morale.

"Tokyo Rose" was the nickname given to Japanese female propaganda broadcasters by allied servicemen during World War II. The broadcasts were in generally excellent English, and appealed to Allied troops to give up their hopeless and unnecessary war against the mighty and invincible empire of Japan. You know, standard propaganda stuff.note And perhaps deliberately so, since the broadcasts were written and produced by coerced Allied prisoners under threat of torture. Imperial Japan, in direct contrast to modern Japan, had become so isolationist and parochial during the era of militarism that despite having no shortage of people who could speak English, they did not have enough citizens with sufficient knowledge of Western cultures to produce the broadcasts on their own.

In spite of the single name, there were multiple Roses, as the voice was not the same each time. At least four women (all ethnically Japanese, three Americans and one Canadian) have been identified, three who broadcast from Tokyo and one from Manila. Like the POWs forced to write the shows, they mostly performed under coercion and duress. To the best of our knowledge nobody has done voice-analysis to ascertain if there were any others, and it is probable that adequate recordings do not exist. Famously vanished aviator Amelia Earhart was considered a prime candidate during the war, but her husband listened to some recordings and denied they sounded anything like her.

Tokyo Rose was actually pretty popular with Allied servicemen. Either out of the comedy value of the obvious propaganda, or because it was a female voice to people that might not have heard another for quite some time (and might not live to hear one again). Probably both. The moniker "Tokyo Rose" itself almost certainly originated with the servicemen themselves, since it does not appear in any of the surviving broadcast scripts or documentation. The surviving scripts also show that rumors that she was remarkably well-informed about Allied intentions, units, and movements were purely apocryphal.

Only one person was ever prosecuted for these broadcasts: Iva Toguri D'Aquino,

an American daughter of Japanese immigrants who was stranded in Japan while visiting a sick aunt there at the beginning of the war, admitted to broadcasting under the name "Orphan Ann".note The name "Tokyo Rose" was coined before she began broadcasting Though neither the occupation authorities nor the FBI could find sufficient evidence to prosecute her in Japan, she was prosecuted on multiple counts of treason upon her return to the United States in 1948. Her prosecution was a pet project for politicians seeking to make a name for themselves with help from some particularly unscrupulous journalists. Despite the complete lack of credible evidence against her and considerable evidence that she'd risked her life aiding the allied prisoners forced to write and produce the broadcasts (Japanese society looked down on American-born Nisei like her, and the Kempei-tai would have taken a dim view of her smuggling food and medical supplies into POW camps — which she did a lot), she was convicted on only one count in 1949 and served six years of a ten year sentence. Still, she was forcibly separated from her husband, an Italian national who was denied entry to the United States, and was warned that if she left the country, she would not be allowed back in (made even worse when you remember that the stress of her wrongful prosecution caused her to miscarry their baby). She received a full pardon in 1977 due to the proven unreliability of her key accusers (who both claimed they'd been coerced into perjuring themselves) and the lack of any proof that she had actually said anything treasonous. An FBI case study found that her effect on Allied morale was, if anything, positive, and in a crowning irony, the US World War Two Veteran's Committee gave her their highest award for her bravery and patriotism in aiding Allied POWs at the risk of her own life shortly before she died in 2006.

In the European theater, the Axis employed two American women as broadcasters who were both given the nickname "Axis Sally" by American troops. Rita Zucca

broadcast from Rome and used the on-air name "Sally," while Mildred Gillars

broadcast from Berlin and usually called herself "Midge." Unlike their Japanese counterparts, both were known Nazi sympathizers who willingly collaborated.note Zucca renounced her American citizenship in order to protect her family's property from expropriation by Mussolini's government and, one year before she got her radio gig, had been fired from a typing job for copying anti-fascist pamphlets. Both served prison terms for treason after the war, but in yet another cruel irony, neither trial got anything like the attention focused on Toguri's prosecution.

," the host of a regular program entitled Germany Calling. Though the program had several hosts, the name "Lord Haw-Haw" eventually became associated with a single individual: Anglo-Irish-Americannote It's complicated. He was born in Brooklyn to immigrant parents. His father was Irish, and his mother Anglo-Irish and raised in Britain (and hostile to Irish nationalism - so much so that her son was targeted by the IRA all the way back in 1921 because he was a notorious informer. ) William Joyce, who held the job beginning in 1940. He had a nasal drawl and so his opening line sounded like "This is Jairmany calling". Joyce was captured in Germany in 1945 and put on trial for treason in Britain, after some legal debate over whether an American citizen (as came out during the trial) could be charged with betraying the Crown. The ruling was that since he'd got a British passport (he'd lied about his citizenship to get it), he was supposed to have loyalty to the King of Great Britain and Northern Ireland. He was convicted and hanged in 1946. Incidentally enough, he was the last person imprisoned in the Tower of London, and the second-last to be executed for a crime other than murder. The Japanese equivalent was an Australian named Reggie Hollingsworth, about whom little is known but who has been described as sounding like "Churchill broadcasting from Tokyo". Fascist Italy partially subverted this trope by foregoing an alias personality altogether and getting noted American poet and mentor to T. S. Eliot, Ezra Pound, to voluntarily give pro-fascist/anti-semitic/anti-American broadcasts until his eventual capture by the Allies following the Italian Campaign

was a Lord Haw-Haw wannabe who also worked for the Germans. He had the dubious distinction of being taken off the air by the Germans in 1942 because his antisemitic propaganda became too strident!

"Tokyo Rose" or "Axis Sally" recordings are occasionally featured in war movies to establish atmosphere. Unfortunately, this is sufficiently obscure these days that it almost qualifies as a Genius Bonus.

Note that the Axis powers were not the only users of this trope: A recent search of The BBC archives turned up a series of concerts recorded by the Glenn Miller Orchestra in 1944 for broadcast to Germany, all hosted by a German-speaking woman known only as "Ilsa". Sadly, Ilsa's identity has been lost to time. The most subtle and effective Allied propaganda broadcast was probably Britain's Soldatensender, which convincingly mimicked an official Wehrmacht propaganda station but gave out rather more information about the problems plaguing the German war effort than the German high command would have wanted to divulge.

Jane Fonda, who made some broadcasts denouncing the US bombing of North Vietnam and their military policy in general during a visit to Hanoi in 1972

, acquired the nickname "Hanoi Jane" as a reference to Tokyo Rose and Hanoi's own female propaganda broadcaster "Hanoi Hannah". She later apologized for this.

During both wars in the Persian Gulf, stories circulated in the American media about an Iraqi broadcaster nicknamed "Baghdad Betty" whose research was a little shaky ("Remember boys, back home in America, movie stars are seducing your wife. Burt Reynolds is seducing your wife. Bart Simpson is seducing your wife." In reality, that line was a Johnny Carson joke on The Tonight Show.) These may have been influenced by Mohammed Saeed al-Sahhaf, AKA "Baghdad Bob"/"Comical Ali", the Iraqi information ministry official whose farcically inaccurate statements (culminating in the proclamation that "There are no American troops in Baghdad" while two American tanks were clearly visible maneuvering behind him) amused and perplexed media observers.