A Degree in Useless 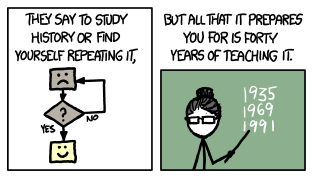 "It is said that a student at Plato's Academy once asked in frustration 'but how is any of this useful?' Plato expelled the student, but first gave him a copper coin so he could say he gained something from his education."
Advertisement:

Wow, you took that degree? Ha! What a loser! First, all your peers will laugh at you for partying instead of studying for a real degree. Then, you'll find that it's impossible to find work in your field, and end up working at Burger Fool for the rest of your life — assuming even the Burger Fool will hire you! Of course, if you are lucky you can become a Mad Scientist's experiment or something and at least make a name for yourself there.

In short, this is a college degree in a subject that is worth less (at least, financially speaking) than the paper it is printed on, and much less than the cash you paid for it. A common use is to have the guy describe his achievements: "Yeah, graduated top three of my class, BA in Arts, my professors predicting me an easy future and all that. Would you like fries with that?".

Of course, people go to college/university for far more reasons than getting a bigger paycheck at the end of it; in terms of personal fulfillment, a person may gain much from their liberal arts degree. From another angle, many students seeking advanced degrees often accumulate classes that will help them get into a good graduate program but not help them in the job market at that point in time. There are a lot of different majors that are subject to such ridicule, being hopelessly specific or too generic to offer you any advancement. See Analysis tab for more.

Another thing is, even for degrees which seem more useful at the beginning of this century (technical degrees), you frequently need other subjects as well. You like Informatics, for example? That can be paired with Linguistics (translator engines), Psychology (user interface design, advertisements), Biology (medical devices), Arts (colour theory, computer graphics), Humanities (digital humanities), English (technical writing), Law (patent law), Philosophy (information ethics)... and a host of others, as long as you're willing to look for examples. The point is, you'll find almost every study subject is intertwined with others the more complex it gets.

And even if some university degree sounds useless, it doesn't mean that it actually is (after all, those who actually studied it may know better), or that it will continue to be in the future (the current huge demand for technical degrees may cause humanitarian degrees to be more sought after in the future). People who have bachelor's degrees and advanced degrees earn more

over their lifetimes across the board compared to those who have a high school education or less, regardless of field of study.

Also bear in mind that American universities aim to create well-rounded students, so they require at least two years of general education before they focus on their majors. Students majoring in the arts have exposure to the hard sciences and vice versa.

See Hard on Soft Science for when scientists invoke this on other scientists. Related to Classically Trained Extra. The Worthless Foreign Degree is when you run into trouble not because of what you studied, but where you studied. Compare Not That Kind of Doctor, where people assume you are a physician when your doctorate was in literature. See also Expert in Underwater Basket Weaving for other useless skills and talents. Contrast I Minored in Tropology, where the "useless" topic isn't as maligned so much as catches others off guard.

By the way: In medieval times, alumni of the University of Paris, France got an official license to beg after they finished their studies. So this trope seems to be Older Than Print.

This is for cataloguing such examples in fiction. Please do not add real life examples to this page.

Alexis's major was criminal justice, which she found herself turned off from in light of the increasing revelation of the American police force's infiltration by and complacency with white supremacist forces. Her minor was indigenous women's studies, something Dick Jett can barely understand, let alone respect.

Alexis's major was criminal justice, which she found herself turned off from in light of the increasing revelation of the American police force's infiltration by and complacency with white supremacist forces. Her minor was indigenous women's studies, something Dick Jett can barely understand, let alone respect.