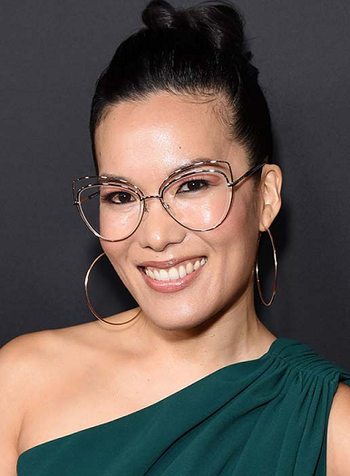 "To be a Trophy Wife, you have to be a trophy. I am more of a commemorative plaque."
— "Hard Knock Wife"
Advertisement:

Alexandra "Ali" Wong (born April 19, 1982 in San Francisco, California) is an American comedian, writer, and actress of Chinese and Vietnamese descent. She started out appearing in high-profile comedy shows before becoming a regular on Chelsea Handler's Are You There, Chelsea?. She has had both minor and major roles in film and television since, including Black Box, American Housewife, and Tuca & Bertie. In 2019 she wrote and starred in Always Be My Maybe alongside her friend and colleague Randall Park.

Wong has also written for Fresh Off the Boat. She has three stand-up specials on Netflix: Baby Cobra, Hard Knock Wife, and Don Wong, and has appeared As Herself on Bill Nye Saves the World and Ugly Delicious.

Common themes in her comedy include sex jokes and Toilet Humor, discussions of double standards surrounding Asians, women, and Asian women, and her family life (usually anecdotes about her Vietnamese mother, her husband, and their children).