Not That Kind of Doctor 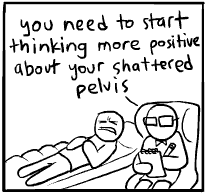 "Dangit, Jim, I'm an astronomer, not a doctor! I mean, I am a doctor, but not that kind of doctor. I have a doctorate — it's not the same thing! You can't help people with a doctorate, you just SIT there and you're USELESS!"
— Dr. Doppler, Treasure Planet
Advertisement:

If someone in TV-land is referred to as "the doctor", it means they're a medical doctor. It might not be explicitly mentioned, possibly even outright denied, but anyone called the doctor seems to be able to deliver any and all surgical operations and medical technobabble required by the plot. There are no exceptions (well, other than THE Doctor). All those other people who've got doctorates in science, law and philosophy are helpfully distinguished from a real doctor with vaguely-academic titles like "professor", if they're even awarded one at all.

This trope stems from a modern convention: in the past, "Doctor" had a purely academic connotation — the word itself derives from the Latin doctor, meaning "teacher", meaning that the title-holder is licensed to lecture at a university on the subject they have a Doctorate in. Later, the meaning of the word Doctor narrowed down to mean that the holder has a doctorate degree: M.D. = Medicinæ Doctor (Doctor of Medicine), or Ph.D. = Philosophiæ Doctor (Doctor of Philosophy). At some point, the word (in English, at least) began to shift from being the title of a learned person/a person with a doctorate to meaning the same as "physician". Originally, the M.D. was a doctorate in medicine, but in some places, like the US and Canada, it became the first professional degree. (In the UK and Ireland bachelor of medicine & surgery — primarily abbreviated as MB ChB, though it can vary depending on university — are the first undergraduate degrees; holders are addressed as "Doctor" regardless. Meanwhile, surgeons — which require a graduate degree, equivalent to a North American M.D. in length of education — are only addressed in honorfics in a form of reverse snobbery.)note Historically, being a doctor (the equivalent to GP today) was considered a more upper-class career than surgery, as they do not have to get their hands dirty. Most surgeons were simply working-class barbers. This was in fact the origin of the iconic barber's pole, which dates back to medieval times; the red stripe represents bloody bandages, with the blue stripe being a much more recent addition that began in the United States (due to the national colors) and has spread from there. However when the modern era rolled around and surgery become a more specialized and prestigious line of work than mere doctoring, the surgeons refused the title of Doctor as a sort of passive-aggressive middle-finger to the snobs who denied them the title 300-ish years previously. It is easy to see how the term "doctor" was slowly divorced from its academic roots. This has gone so far that it is common for it to be thought that "real" doctors are physicians... which brings us to this trope. And M.D. Envy to boot.

Certain professions blur the line. A psychiatrist or forensic pathologist will necessarily have a medical doctorate, but their main occupation isn't taking care of people's cuts and sniffles. If they're suddenly forced to act like that kind of doctor — like, say, they're on hand when someone gets hit by a car — expect them to act awkward and unsure before they save the day. In all likelihood, after all, it's been years since they had to give much thought to the treatment of physical injuries. Veterinarians would also cause this trope, as they work on animals rather than humans, although they are properly addressed as "Doctor" when working.

Not to be confused with Morally Ambiguous Doctorate. See also Open Heart Dentistry and Omnidisciplinary Scientist. Compare All Monks Know Kung-Fu (which is, basically, Not That Kind Of Monk) and Not That Kind of Mage, where someone good at one form of wizardry is unskilled at another. Contrast with Super Doc, when the Doctor can heal you no matter what his field is. If the character actually complains about this, he might say some form of I'm a Doctor, Not a Placeholder.

Note that this trope holds water only in certain languages, such as English; other languages were smart enough to create different words to distinguish between MDs and PhDs. An example would be Chinese, where the medical professionals are addressed as [Surname] yīshēng while academics get [Surname] bóshì. In languages that don't have the distinction, the use of "Doctor" by non-MDs varies with culture: in English-speaking cultures it is frowned upon for someone with the title of "Doctor" to use it in a field where their title does not apply. For instance, if a Doctor of Education worked in a hospital, referring to himself as a doctor could be misleading since he has no background in medicine. But in some countries like Germany and Italy, it is almost always used.

Doctors who really do practice medicine:

Other kinds of doctors: