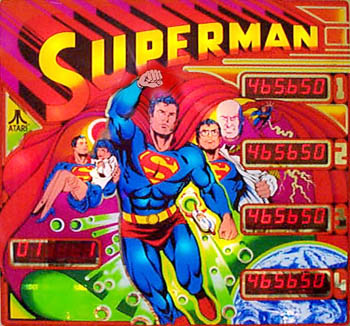 Let's not joke about "balls of steel", okay?
"The World's Most Powerful Pinball!"
— Promotional postcard
Advertisement:

Superman is an arcade pinball game designed by Steve Ritchie, with artwork by George Opperman and programmed by Eugene Jarvis. It was released by Atari in 1979.

As with other Pinball games of The '70s, Superman has a series of objectives but no overarching plot or goal beyond a high score. Light the top rollovers to raise the bonus multiplier, then hit the Metropolis dropdown targets to enable various bonuses. Shoot through the Fortress of Solitude or Luthor's Lair to return to the top of the board, and spell SUPERMAN to get extra points and light the Special.

Among Atari's meager pinball catalog, Superman is the one that has best stood the test of time, and is still enjoyed by players today for its fast, straightforward action and balanced gameplay. A Superman pinball is part of the memorabilia collection at the offices of DC Comics.