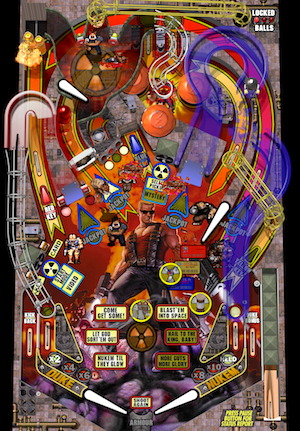 Balls of Steel is a pinball computer game developed by Wildfire Studios and released on December 12, 1997. It is the only title to be published under the Pinball Wizards label, a division of Apogee Software (today known as 3D Realms).

The game's original box art showed a female hand holding a large pair of pinballs, above the phrase, "Come play with our balls." It came with five tables:

All of the games are played from a top-down view, either via a vertically-scrolling playfield or with the entire table visible. "Darkside" was available for free to play in the shareware/demo version of the game, while a sixth table, "Devil's Island" (about explorers seeking a gold treasure on a tropical island) was released separately by Wildfire Studios. The game's realistic physics and highly interactive and imaginative tables have been lauded by fans, who rank its games among the best Digital Pinball Tables since the Pro Pinball series.

When the game was originally released, it was possible to upload high scores to the WorldScores server for global rankings. This feature has since been discontinued.