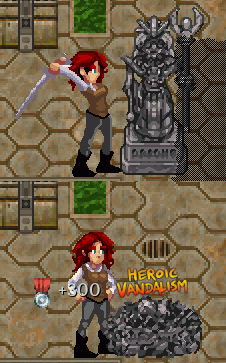 It wasn't a very good likeness, anyway.
Link: Dude, if I just thrash around in the grass, money appears. Money literally just shows up out of nowhere.
Citizen: I watched a living skeleton decapitate my parents.
Link: These vases, they have money in 'em too!
— The Legend of Link's Distractions

Blowing up plants, grass, walls, pots etc. isn't just fun; it's profitable! Often a character will find health, powerups and cash just waiting to be revealed after violence is administered to inanimate objects. Why these inanimate objects are present in the first place, why the NPCs never seem to notice the Kleptomaniac Hero smashing them up and running off with the valuables inside, or how the items inside survived the vandalism itself is rarely a concern.

Like Level Grinding, nobody but the heroes actually takes advantage of this.

Compare Die, Chair, Die!, Everything Breaks. If you're not just finding items, but being credited immediately with points or money when you break stuff, it's You Break It, You Profit. See also the Money Spider, a monster that is specifically hunted for the prizes it drops.

A sterling example of a Violation of Common Sense.