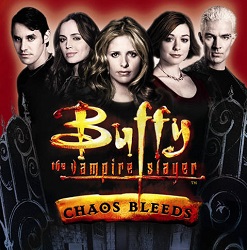 The Gates of Hell Have Opened. Huh, must be Tuesday.
Advertisement:

Buffy the Vampire Slayer: Chaos Bleeds is a 2003 video game developed by Eurocom and published by Vivendi Universal Games for the PlayStation 2, Nintendo GameCube, and Xbox. It's technically not a sequel as such to the first game, but it plays the same. Set during the fifth season, the player is tasked with fighting as Buffy, Xander, Willow, Spike, Faith and Sid the Dummy through Sunnydale and beyond.

When the vampire Kakistos, last seen after Faith dusted him, seems to be Back from the Dead, the Scoobies go to investigate. It turns out that Ethan Rayne has made a deal with The First Evil, where the Scoobies are transported to an Alternate Dimension to fight The First's champions. If he wins, Ethan will be made a full Chaos Demon. The Scoobies must find a way to stop them both and return home.