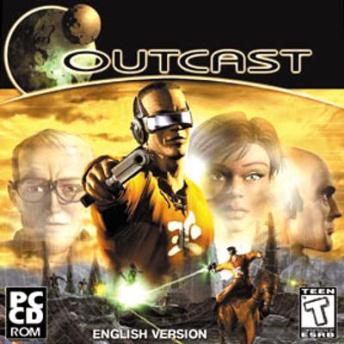 A surprisingly, amazingly good third-person adventure, Outcast was noteworthy for its time for a host of innovative and effective game developments, almost all of which sadly reduced its chances in the marketplace. It had the bad luck to use unusual rendering method widely called "voxels"note actually "a height field with some software raycasting" to generate a wide-open, go-anywhere play world... just when 3D accelerators based on rendering polygons got really popular.note Although, had they gone with polygon rendering on the GPUs available at the time, no computer in the world at that point in time would be able to handle the game. It had a deep story, with good writing... just as Internet-based deathmatches with Excuse Plots became popular. It had a full orchestral — and we mean orchestral, as in "a big bunch of real musicians" — score, in a time when techno or rock was almost required on any game's soundtrack.
Advertisement:

You, as Cutter Slade, are sucked into an alternate world, Adelpha, after a physics experiment Gone Horribly Wrong, along with several researchers: William Kauffman, the head of the project who believes in an infinite number of parallel universes; Anthony Xue, his partner who is responsible for the energy requirements, and Marion Wolfe, a former journalist and daughter of the senator who, after a botched paradrop exercise, essentially forced Cutter into retirement. Your character winds up in an alternate world, with a vaguely medieval society of aliens called the Talan going about their business, who immediately begin to revere him as their messiah, the Ulukai. Oddly enough, though, they all speak English when talking to you. The merchants sell ammunition that fits your guns. And there's an in-universe reason for all of that...

A sequel was planned, but before development could really get off the ground, the company went bankrupt. This website

preserves what little remains from the original sequel's development materials, including a design doc draft

is currently in development by a group of enthusiasts. And in April of 2014, several of the original devs started a Kickstarter project

to fund an HD remake of the first game, with eventual hopes to develop a sequel. While said Kickstarter didn't succeed, the developers created a remake, titled Outcast: Second Contact, which was released on November 14, 2017. The trailer for the remake can be watch here

. A sequel was finally announced in 2021, titled Outcast 2: A New Beginning.

if you missed out the first time around. With the digital releases, the game was updated to run smoothly on modern-day computers with higher resolutions, an improved HUD and gamepad-friendly control options.