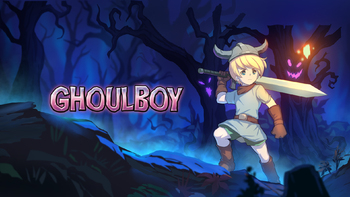 Ghoulboy is a Retro-Inspired Action Platform Game by Serkan Bakar and Dolores Entertainment.

The land of Gunzabar is ruled by an evil Goblin King. Under his reign, all manner of evil monsters wander the land freely. But there is a prophecy. It is said that one day, a ghoul hunter will rise up and slay the last goblin king. The current king knows only one ghoul hunter, and suspects him of being the one who will fulfill this prophecy.

This hunter is Galdar, the merciless berserker who has indeed slain many a ghoul, and is now training his son, Thulgar, in his ways. Thulgar has progressed so far, that he has earned a nickname from many... Ghoulboy.

The king orders Galdar to be imprisoned, hoping this will end the prophecy, and ensure his reign is a long lasting one. However, he did not account for Thulgar, who has set out on a quest to slay the Goblin King and rescue his father, and all of Gunzabar, from his clutches.