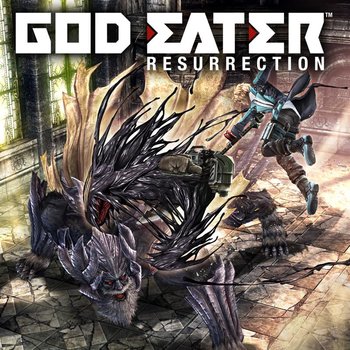 The cover art for the remake God Eater Resurrection
Advertisement:

In the early 2050's, unknown life forms called Oracle Cells began their uncontrollable consumption of all life on Earth - of individual life forms at first, and then, from this, as amalgamated life-form constructs that varied massively in shape and size. Their violent nature and god-like adaptability earned them the name "Aragami". Facing an enemy completely immune to conventional weapons, modern society collapsed as humanity was driven to the point of extinction.
One last hope remains. Following the Fenrir Organization’s development of God Arcs, Oracle Cell-based living weapons, their wielders are organized into an elite force of God Eaters. Your mission is to defeat the Aragami and gather material from them for research, but you come to realize that you are being drawn into a giant conspiracy that will determine the fate of humanity...

Released in Japan on February 4, 2010 for the PlayStation Portable, Bandai Namco Entertainment's God Eater established Namco's foothold in the "Hunting RPG" genre (going up against the Monster Hunter franchise) and kicked off the franchise of the same name, with GE1 establishing how GE differs from MH by way of its faster-paced combat, easy-to-grasp gameplay mechanics, as well as having a wide list of characters and an actual plot (which, at the time of GE's release, was unusual for a game of this sort). An Updated Re-release, titled God Eater Burst, was released on October 26, 2010 in Japan and March 15, 2011 in the rest of the world with an enormous raft of improvements based on user feedback (all of which later became standard for the games). It also added a second storyline which expanded upon the original and answered some of the lingering questions. A remake using the God Eater 2 Rage Burst engine, God Eater Resurrection, was released in Japan on October 15, 2015, June 28, 2016 in North America, and August 30 in Europe for the PlayStation 4, Play Station Vita, and Steam (and, especially on the latter platform, was a package deal with Rage Burst). It adds yet another storyline (bridging the gap between GE1 and 2), as well as the new weapon types from the sequel, improved graphics, and the Predator Styles, which add several variations on the Devour move.

The aforementioned God Eater 2 served as the game's sequel. An anime adaptation started airing during the Summer 2015 season, though its conclusion only came out in Spring 2016.