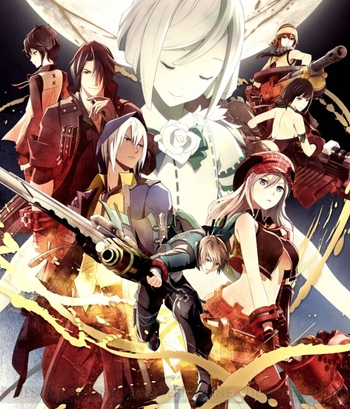 , with Marvelous First Studio taking over for 3 as Shift was busy with Code Vein in the interim), setting itself as a rival game franchise to Capcom's popular Monster Hunter franchise. Set in a post-apocalyptic world devastated by the Aragami, bizarre monsters made from microscopic Oracle Cells that can devour almost anything and take on its properties, humanity has been pushed to the brink of extinction. Mankind's last hope rests upon the shoulders of the God Eaters, elite soldiers who have been infused with Oracle Cells, turning themselves into part-Aragami and allowing them to fight back by using the God Arc, a bio-mechanical Morph Weapon made from the same Oracle Cells that make up the Aragami's biology.

Contributing to the longevity of the franchise is the very fact that the story is not your typical "fight the monsters, save the world" story involving a Creature-Hunter Organization (though certainly, you end up doing a fair amount of that, too). The franchise explores the bleakness of surviving a post-apocalyptic Earth such as how humanity struggles to survive despite the world's current state, what mankind is willing to die for in order to save the lives of many, and how does our morality define us in the face of extinction. Its popularity has also led to various adaptations and Spin Offs in anime, manga, and light novels.

On December 21st, 2015, both God Eater 2: Rage Burst and God Eater Resurrection, were announced for an overseas release

Aside from the games, various other media were released to either promote the game, or expanding the franchise's established universe.

WARNING: The following tropes in this page contains a heapful amount of spoilers, most of which are been left unmarked! Read at your own risk!