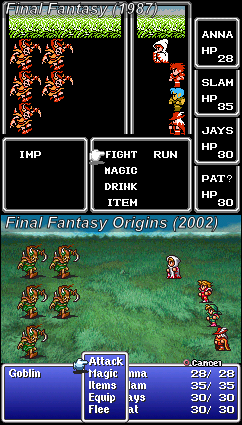 "If you go to Kickstarter and say the name of a popular game from the mid-nineties followed by the word "remake", money will be thrown at you with such force that you'll resemble a currency-themed cousin to Pinhead from Hellraiser."
— Yahtzee, Zero Punctuation, Rise of the Triad
Advertisement:

While some could argue that video games are an artistic medium on par with movies and literature, most video games fail to stand the test of time in the same way that other media do. As computer technology and game design is constantly evolving, many titles may start to look and play extremely dated in comparison to what's available, say, five to ten years after its original release.

So what's a developer to do? Easy: take the original game, upgrade the visuals so that they're on par with the current standards, add a few more recent gameplay mechanics, maybe fine-tune the levels a little, and presto, now you can convince the consumers to buy basically the same game they bought five to ten years ago! If you want to confuse them further, you can explicitly promote it as a sequel to that game, despite having largely the same content. Just don't expect to be able to release it again five years later, unless it's a Compilation Rerelease. Also an opportunity to adjust the original story and visuals to include changes that later sequels adopt, or update the "Blind Idiot" Translation into something more accurate and readable.

This trope is a way to avoid Keep Circulating the Tapes if the original is hard to find, although a port or Updated Re-release can do just fine if the game has aged well. Notably, remakes tend to invoke changes to practically every detail in the graphics, gameplay and sound (especially if the game is 10 years old or more), and many fans may outright prefer the original in spite of these changes. How warranted this is can vary from changing a character's outfit slightly to the controls genuinely not being as refined as the first time around. Tropes Are Tools after all, and just because the remake's developer can follow the blueprint set by the original game doesn't guarantee their version won't have its own problems! This is especially true for remakes of fantastic games, resulting in a Tough Act to Follow.

Remakes are hardly anything new, with examples dating as far back as Super Mario All-Stars, however despite the marketing, they are just as fallible to time and aging as any other video game. For example, the original 1996 Resident Evil was remade in 2002 as Resident Evil (Remake), which itself started to age and has been given an Updated Re Release on every console generation after that. This problem is highlighted by poor backwards-compatability in the console space for most generations, which some would argue is on purpose so that you have to buy the same game again rather than using your existing copy.

This is, obviously, a subtrope of The Remake. If the original game was only released in one country, the publisher may then actually take a chance of releasing the remake to other markets. If the fans decide to remake the game themselves on a new engine, that's a Fan Remake. Distinct from the Updated Re-release, because that's merely rereleasing the same game with modest additions and improvements, whereas this is recreating the entire game from the ground up on new technology. The inversion of this concept is the Video Game Demake, which downgrades the graphics.

Remakes on the Wii tended to be known as Wiimakes, just because Wii can.

In 2019, it was announced that a remake was in the works, developed by Black Forest Games and published by THQ Nordic. It was released on July 28th on PC via Steam, Epic Games, and GOG.com, as well as having Google Stadia, PS4 and Xbox One ports.

In 2019, it was announced that a remake was in the works, developed by Black Forest Games and published by THQ Nordic. It was released on July 28th on PC via Steam, Epic Games, and GOG.com, as well as having Google Stadia, PS4 and Xbox One ports.