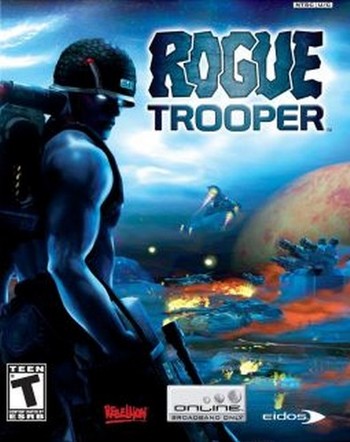 Rogue Trooper is a 2006 video game based on the comic book of the same name. It was originally released on the PC, PlayStation 2 and the original Xbox with a version titled Rogue Trooper: The Quartz Zone Massacre being ported to the Wii in 2009. A remastered version

was released in October 2017 for the PlayStation 4, Xbox One and Nintendo Switch.
Advertisement:

Following the titular Genetic Infantryman through the Quartz Zone massacre and through his subsequent quest to find the Traitor General, the game stays relatively true to the original strip's storyline. Rogue, with the help of the biochips of his dead comrades, Helm, Gunnar and Bagman, fights his way across Nu Earth in search of the traitor. Fitted to his helmet, rifle and backpack respectively, they add abilities for Rogue to make use of in the field; Helm can be used to hack computer terminals to open doors, Gunnar can be used as a Sentry Gun and can be fitted with attachments for a variety of purposes, while Bagman stores and crafts ammo and supplies and can upgrade Rogue's equipment by use of salvage taken from fallen enemies.