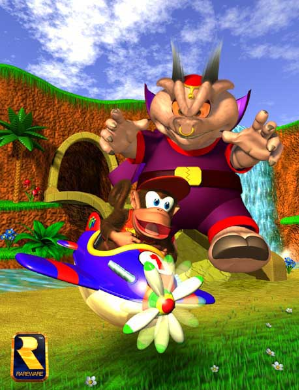 While lounging at his pad and eating bananas, Diddy gets a message from his far-off pal, Timber the Tiger. Timber's island home is in trouble—an evil sorcerer FROM SPACE named Wizpig has landed on the island from his UFO, and has claimed it for his own! The only way to oust the foul creature is by... racing him.

Specifically, by racing each other, to gain gold balloons, to be able to race his minions, to claim pieces of his amulet, to open the pathway to his hideout, so then they can race him. With the help of his friends (and a Kremling who snuck along for the ride), Diddy (and Timber) set out to rescue the island by racing.

While the original Diddy Kong Racing was, essentially, a capitalization on the Mario Kart formula, it was unique among kart racers at the time because it actually has a story mode, and even has a colorful Hub Level that connects all the differently-themed levels.

While the tracks in Mario Kart have little in common with one another, the worlds in Diddy Kong Racing (which also served as the "cups") actually have themes to them.