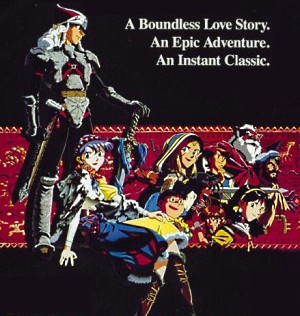 Bold claims, but we love it anyway.
A series of Role-Playing Games started in 1992, developed by Game Arts. All the entries in the series are set on the eponymous world of Lunar. It is a stock sword-and-sorcery fantasy world, but with an Alien Sky dominated by an object called the Blue Star. The twist is that Lunar is indeed a moon — and according to legend, one that was empty and lifeless until a goddess transformed it and moved people there from the Blue Star... according to legend. The reasons (and long term effects) of this become important plot points.

First developed for the Sega CD, at a time when role-playing games were a niche outside of Japan, it became a Sleeper Hit in the console's short lifespan, ending up as its second highest selling title. A sequel came, entitled Lunar: Eternal Blue (no numeral), and the series has been producing remakes and spin-offs ever since, with the PlayStation remakes, Lunar: Silver Star Story Complete and Lunar 2: Eternal Blue Complete being the best known to English-speaking fans.

The series' release list is as follows, with remakes grouped and split release dates comparing first Japanese release date to the U.S. date:

There are variety of other Lunar-related media that never left Japan - novelizations, manga, drama CDs, even a short anime film made for Magic School Lunar!. The one exception is the Silver Star Story novelizations, which are available in English via Kindle.

The Lunar series and related media provide examples of: