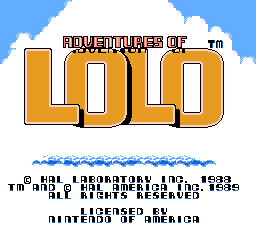 The Adventures of Lolo is a trilogy of Block Puzzle games released on the NES, and part of Hal Laboratory's Eggerland series (which began its life in Japan on the MSX computer system). A beast known as the Great Devil (King Egger) has kidnapped Princess Lala and, in typical bad guy fashion, imprisoned her at the top of a Death Trap and monster-laden tower. It's usually up to Lolo to solve the puzzles with and climb to the top and rescue her. The third game in the trilogy allows you to play as either character.
Advertisement:

Interestingly, despite Hal being a subsidiary of Nintendo, Hal owns the Lolo series independently and completely, unlike some of their more popular titles.

The Lolo games provide examples of: