Video Game / The Adventures of Robbo 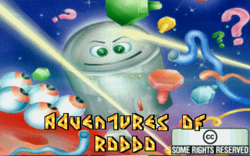 The Adventures of Robbo is a Puzzle Game for DOS PCs, developed by xLand Games and published in 1994 by Epic Megagames.

It was re-released under Creative Commons in 2006, and can now be played online or downloaded here