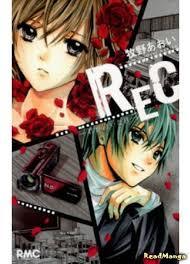 "I will never forget you - for as long as I live"
—- Tagline
Advertisement:

Main heroine Minami Aizawa is a girl who has never cried one single time in her entire life, not even when she watches a sad movie starring her classmate Satoru Wakabayashi (sometimes called Akira), who suddenly retired from acting for no strong reason. She's more of an anti-social loner but always carries around a camcorder to film everything she likes. Despite the rumor that she is the one behind the viral video of a dead cat, Satoru suddenly approaches her and seems to understand her quirks. They quickly become friends, but we soon find out that Satoru is hiding a huge secret from the world...

Not to be confused with manga Rec (Rekku) by Q-Tarō Hanamizawa and no relation whatsoever to [REC].

A note regarding spoilers: This page assumes you know the First-Episode Twist of the work in the end of chapter 1 (out of 4), that is the reason why Satoru retired from acting. If that is too much for you, read that first before you continue here.