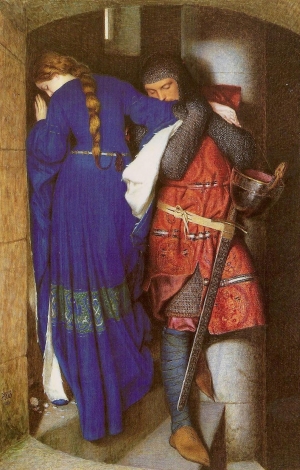 Star-Crossed Lovers from a ballad, just before his death at her brothers' hands
I lifted her head, and when she smiled and said
"Hold me, Darling, for a little while."
I held her close, I kissed her our last kiss;
I found the love that I knew I would miss
But now she's gone, even though I hold her tight
I lost my love, my life, that night.
— J. Frank Wilson and the Cavaliers, "Last Kiss"
Advertisement:

The only kiss that's more meaningful and dramatic than the First Kiss (unless, as is frequently the case, they happen to be one and the same). It's not just the last one we'll see, it's the last one these two characters will ever share... as far as they know at this point, at least. If the characters don't think it could be their Last Kiss, the music and color scheme of the scene will definitely indicate to the audience that it is.

The favorite time to write it in seems to be when one (or both) of the partners is/are on their deathbed (or past it), literally or proverbially, such as just before someone goes off into battle (or their wedding). Possibly will be teary. Less dramatic in old shows where the main character could share one with every new Girl of the Week or Temporary Love Interest.

May be a Last Request.

See Also: Final First Hug and Go Out with a Smile. Death's the time to show you love someone.

Sometimes overlaps with Dude, She's Like, in a Coma!.

Not to be confused with Kiss of Death or Sealed with a Kiss. And definitely not with I Love the Dead. If the characters think it's their Last Kiss but it turns out not to be, it's a Now or Never Kiss.

As a Death Trope, there may be unmarked spoilers ahead.