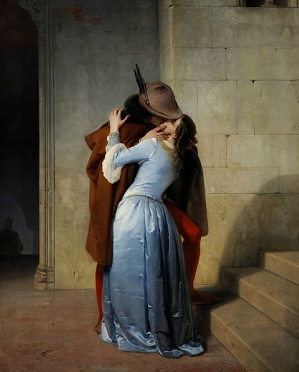 The Kiss (Il Bacio) is an 1859 oil painting by Italian artist Francisco Hayez, associated with the Italian Romantic movement. The painting pays homage to France's contributions to the Italian unification (Risorgimento) against the Austro-Hungarian Empire. Hayez painted multiple versions of The Kiss with minor differences; the most well-known is housed at the Pinacoteca di Brera in Milan, Italy.

It depicts a man and woman in the Middle Ages sharing a kiss by a stairway. Despite this tender moment, there are indications of danger — for example, a shadowy figure is coming up the stairs.

Tropes in the painting: