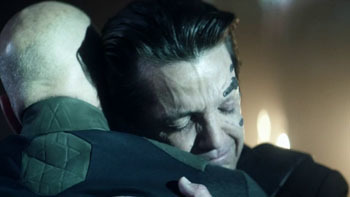 It Was A Dark And Stormy Flashback. Young Soji Asha is walking down a hallway clutching a stuffed toy, looking for her father. She enters a laboratory overflowing with orchids, but then a man calls her name. Back in the present, Soji awakens, and mentions to Narek that this has become a recurring dream.

Aboard La Sirena, Dr. Jurati (MD) gives her post-mortem on Bruce Maddox, whose heart simply couldn't take the abuse and who passed of his injuries. They then discuss the Artifact, where Maddox confirmed that Soji is. Elnor, whose Qowat Milat Brutal Honesty training apparently includes being very adept at reading other people's emotions, notes that Picard is not looking forward to visiting a Borg Cube, and Picard admits that his last visit to one was highly involuntary (see TNG: "The Best of Both Worlds"). Jurati points out that the Borg on the Cube have been cut off from the Collective, and may be different in nature, but Picard doubts it: "[The Borg] don't change. They metastasize."

Later, Rios is keeping in shape by kicking a soccer ball around. Jurati comes out, as she has been unable to sleep. Rios asks if she wants to talk about the death of her mentor... but Jurati, if her kissing Rios is any indication, has other things on her mind than talking.

On the Artifact, Narek finds Narissa in his quarters. She's messing with his tan zhekran, the eponymous impossible box (a.k.a. a Romulan Rubik's Cube). She admits that her first impulse with these things is to smash it open to get to the prize, but Narek shows her that if she simply takes the time to understand the darn thing, it will yield its secrets up to her. He relates it to Soji: he believes that her dreams are not some sort of random positronic firing-off, but rather her brain trying to reconcile what she was programmed to believe — that she is a normal muggle human — with reality — that she is a gynoid implanted with Fake Memories. Narek believes that caught somewhere in that maelstrom of forced ignorance is the location of the lab whence Soji, Dahj, and the others (remember, the Zhat Vash are convinced that there are more) came from. Narissa allows him to proceed.

La Sirena is about to leave the Former Romulan Neutral Zone and enter Actual Romulan Space. This will be a treaty violation unless they have a valid reason to be there. After juggling some ideas, particularly Dr. Jurati's (perfectly legitimate) credentials as a cyberneticist, the crew settle on fishing Raffi, drunk, out of her room. Raffi calls an old friend, Emmy, who is still active in Starfleet, and explains the situation— exactly as it is. If Emmy can't get them diplomatic credentials to visit the Artifact in, oh, three hours — yes, Picard did it all on his own, you know what that guy's like — there's going to be an interstellar incident. Emmy, angry, agrees. The crew applauds Raffi as she staggers back to her quarters. Later, Rios visits her to make sure she's okay, and she mentions that she has a son — not to mention a Romulan daughter-in-law and a granddaughter on the way — as a way to castigate herself about being too devoted to business.

Soji is, as Narek indicated, beginning to grow suspicious of her own nature. This increases when Narek mentions that every time she calls her mother, it lasts exactly 70 seconds. (He's not stalking her personally there— all transmissions into and out of a Romulan installation are monitored by procedure.) When she talks to her Mom that night, Mom mentions that she (Soji) must be tired and overworked, and Soji is almost overwhelmed by a need to sleep. When she manages to fight it by poking herself awake, "Mom" repeats the command and Soji passes out. When she wakes up, though, her memory remains. She grabs a scanner and goes through the objects in her room— her childhood diaries, photos of herself and Dahj, the stuffed animal that she was carrying in that opening flashback, the twin-rings necklace that she wears. All of them register as being approximately 37 months old.

The diplomatic credentials that Raffi's friend manages to wrangle up will only cover Picard, who is being sent as an envoy to the Borg Reclamation Project. Picard must go in alone, little though he cares to; he gives explicit orders to Elnor to stay behind. Once aboard the Artifact, flashbacks to his time in the Collective assail him, and he's caught between rampaging Borg drones on one hand and a bottomless drop on the other... until a voice rings out: "They don't want you to fall!" It's Director Hugh, and the Borg drones are actually xBs who just saved Picard from a very nasty fall. The two old friends embrace, and Hugh agrees to bring Picard to Soji.

Soji, shaken, confesses the nature of her belongings to Narek. He offers her a solution: a (normally-Romulans-only) meditation technique called the Zhal Makh. It's essentially a Pensieve Flashback: Soji first relives the dream, including the Catapult Nightmare component, and then, under the guidance of Narek as he continues to fiddle with his tan zhekran, takes control of the memory. Instead of jolting awake when her father yells at her, she presses through the orchids to see a lifesize wooden doll on a work-table... a doll that has her face. Looking up, she sees "two red moons, dark as blood, surrounded by lightning." Narissa, who has been listening in this whole time, congratulates Narek on finding the synth homeworld. Narek then bids Soji a tearful goodbye and locks her in the meditation chamber. He leaves behind only the tan zhekran... which opens to reveal poisonous gas. Mortal danger, as it did for Dahj at the start of the series, triggers Soji's Traumatic Superpower Awakening, and she smashes through the floor of the meditation chamber.

Picard, led by Hugh, apprehends her as she drops through the floor on another level. Basically, the only reason why she even considers following him is that he holds out Dahj's necklace, the twin-ring thing that is only 37 months old. Hugh leads them to the queencell (neither Picard nor Hugh has ever been there before, but the memories are there nonetheless), in which is secured a piece of technology called the Sikarian spatial trajector (see VOY: "Prime Factors"), which can send humanoid-sized objects up to 40,000 LY. Picard orders La Sirena to break orbit and meet them at Nepenthe (wherever that is), and Rios agrees, only to look around and realize: "Where's the kid?"

Romulan mooks arrive, but then so does Elnor's sword. ("I thought I told you stay on the ship!" "Yes. I didn't listen.") He and Hugh, now armed with a disruptor rifle, stay behind to Hold the Line as Picard and Soji escape, and the screen fades to black as the door of the queencell closes.