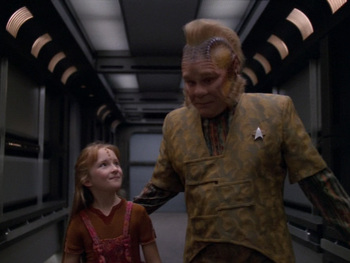 Naomi Wildman being a lil' cutie pie. And Neelix praying that nothing screws that up.
Not to be confused with the ABC series.

Little Naomi Wildman has grown up a lot since we saw her last. Ktarian father, you know. She's being brought up the right way, teaching her all about not just life on board a starship, but life in general; in this case, being the 24th century, it's interactive holographic programs, both on and off the holodeck. Flotter is her favorite watery-creature-thing, and his nemesis, the woody "monster" Trevis, help her learn basic physics and social skills. And the Doctor teaches her biology, and tries to conceal the danger of her Mom's missions from her.

She doesn't get to see her Mom very often lately, her being an Ensign on Voyager, so when it's time for bedtime she balks, but when Naomi hears she'll get to talk to her Mom, she jumps at the opportunity. Unfortunately, Mom might be gone a few more days. She does have her godfather Neelix to keep her company, but there's no substitute for Mom!

However, she, along with Tom and Tuvok, are caught in a series of heavy ion storms that do some heavy damage to the recently-christened Delta Flyer...