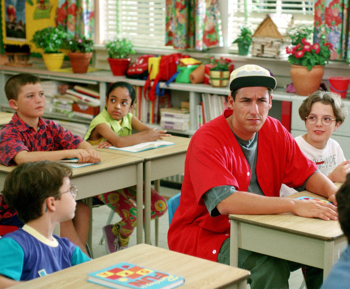 In Real Life, adults furthering their education by returning to school is a fairly common occurrence — and one that can happen for any number of reasons, even out of a genuine love of learning.

However, in the realm of movies and TV, this situation is looked upon as purely humorous. Plots in which the main adult character — and it usually is the lead; only occasionally will you see a more minor character as the focus of this sort of story — has to return to school are pretty much exclusive to the comedy genre.

Your average John Q. Dropout's reason for completing his education is nearly always related to his career, sometimes to obtain a new job requiring a higher degree of education and other times because his current job demands it. Stupidity and incompetence will often be lampshaded. The character will often be thrown amongst people outside their age group or at least act in that way. In situations involving a character being de-aged, this is a result of Compulsory School Age.

When actual school children have to repeat a grade you want Held Back in School. Not to be confused with a regular Slice of Life scenario involving children having to go to school after the summer break ends.

If you're looking for the 1986 comedy of the same name, go here.

After being revealed to not know how to read, Barbrady does to 3rd grade to finish his education

After being revealed to not know how to read, Barbrady does to 3rd grade to finish his education