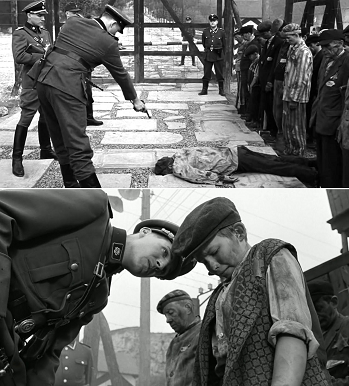 "What do you suppose something like this does to a kid?"
— Alexander Knox, about the murder of Bruce Wayne's parents, Batman (1989)
Advertisement:

There are a lot of things Moral Guardians believe kids should not be exposed to, and that doesn't just include violence and bad language. Issues such as sexuality, death of loved ones, bad guys winning, horrific historical events, and other things are generally kept from kids until they're considered mature enough to understand them, or at least handled with extreme sensitivity. Because Children Are Innocent.

But, sometimes a kid comes across something kids shouldn't see anyway. Maybe the kid accidentally opens the parents' bedroom door while they're getting it on. Maybe the kid has a parent who dies violently before their eyes. Maybe some other thing happens that throws the kid into the harsh realities of life before they're ready. Expect at least one image of Blood-Splattered Innocents.

Often used as a Freudian Excuse for iniquitous characters.

Note that this isn't about what is or isn't harmful to minors in real life. Plot device, people.

Compare Corruption of a Minor, Children Forced to Kill and What Do You Mean, It's Not for Kids?. Contrast Corruption by a Minor, Troubling Unchildlike Behavior, and Bloodbath Villain Origin. See Would Hurt a Child if some evildoer is specifically targeting a minor.

Examples of kids being exposed to horrific violence:

Examples of Kids being exposed to sexuality:

Examples of Kids being exposed to both: