Film / The Military Policeman and the Dismembered Beauty 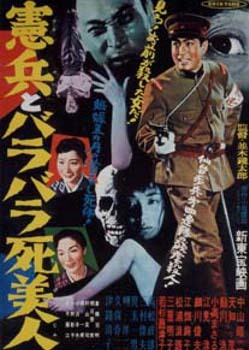 Kenpei To Barabara Shibijin (憲兵とバラバラ死美人) AKA The Military Policeman and the Dismembered Beauty is a film most known for traumatizing Shigesato Itoi as a child, and inspiring him to create Giygas and unleash his horror upon us all via EarthBound (1994).
Advertisement:

However, there is quite a bit more to the film than that. It takes place in World War II, during the time when Japan occupied Manchuria. A group of Japanese soldiers in the city of Sendai (located in the Tohoku region, quite some distance away from Tokyo) discover the body of a dismembered woman in a well. At least a month goes by, and the investigation into the woman's death goes nowhere. Cue the arrival of Miltary Policeman Staff Sergeant Kosaka to solve this mystery!