Comic Book / Stanley and His Monster 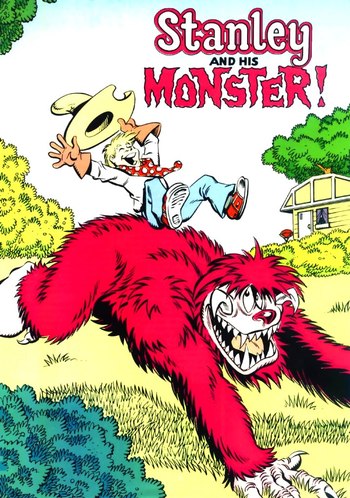 Stanley and His Monster was a humorous fantasy series published by DC Comics back in the days when they didn't just do superheroes (the late 1960s, to be precise). The series started its life as a back-up feature of the The Fox and the Crow comic series in 1966, before it would briefly take over as the main feature until the book's cancellation in late 1968. Written by Arnold Drake with art by Winslow Mortimer, it concerned six-year-old Stanley Dover, who meets a large red shaggy monster that's more afraid of people than people are of it. Stanley adopts the monster as a pet, and names him Spot.

It was briefly revived in the 1990s by Phil Foglio, who wrote an issue of Secret Files and Origins (which revealed that Spot was actually a demon who had been booted out of Hell for being too nice) and a four-issue mini-series. The revival managed to make the fluffy whimsical series into part of The DCU without making it Darker and Edgier — this despite the fact that the mini-series culminated in Stanley storming the gates of Hell to rescue Spot. An ongoing series did not result, and that's the last the world heard from Stanley and His Monster apart from occasional guest appearances.

In 2001 Stanley and his monster appeared in, of all things, a Green Arrow story arc written by Kevin Smith — which was not fluffy or whimsical at all, and which led to a character named Stanley Dover who had very little connection to this Stanley appearing in Season 7 of Arrow. They also made a cameo in Infinite Crisis and in a story arc in Superman/Batman.

Stanley and His Monster provides examples of:

The 1993 mini-series specifically provides examples of: