Western Animation / The Fox and the Crow 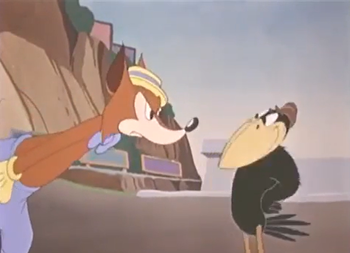 Fauntleroy Fox and Crawford Crow, in a scene from the 1942 short Toll Bridge Troubles
Advertisement:

A series of animated short subjects created for Columbia Pictures by their Screen Gems cartoon outlet. The shorts are centered around the eponymous characters, Fauntleroy Fox and Crawford Crow.

The first film in the series, The Fox and the Grapes, was directed by ex-Looney Tunes veteran Frank Tashlin, and was an experimental short in using a classic "blackout gag" format: this makes it feel like a woodland precursor to Chuck Jones' later Road Runner cartoons—Jones even cited that short as an influence on his series! The short's plot established the relationship between the duo, with the dim-witted Fauntleroy going about his business, only for the crow to decide to pester him for the sake of it.

After this, the series branched out to become a more standard-issue gag series, lasting for several more shorts. When United Productions of America (UPA) took over cartoon production for Columbia, they did three Fox and Crow shorts out of contractual obligation before retiring the characters for good to concentrate on their own creations, like Mr. Magoo and Gerald McBoing-Boing.

Curiously, the series didn't run particularly long in theaters, but it was popular enough to be adapted into a hit comic book series by DC Comics, which ran for an impressive 20 years. Of note, said comic book was also the origin of the Stanley and His Monster series, which started its life as a back-up feature in 1966, until it briefly took over the comic as the main feature until the series' cancellation in 1968.