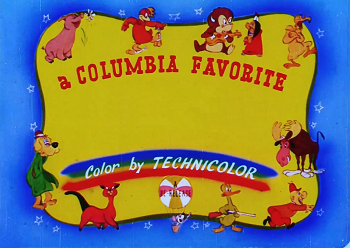 Of all the classic theatrical animated cartoons, those released by Columbia Pictures during The Silent Age of Animation and The Golden Age of Animation are perhaps the most overlooked by the general public today. This is unfortunate because some of the most significant endeavors in the medium's history emerged from the collective works of Charles Mintz, Screen Gems and UPA. It is difficult, for example, for one to think of the history of animation without films like "The Little Match Girl", "The Fox and the Grapes", "Gerald McBoing-Boing" or "Rooty Toot Toot" that, in so many ways, redefined what a cartoon was. The only short they did that's still somewhat famous today is their adaptation of Edgar Allan Poe's The Tell-Tale Heart, which is often played in schools.

While the history of Columbia's animation output is marked by hits and misses, experimentation is a constant. It was the early Charles Mintz/Screen Gems studio that produced some of the most groundbreaking cartoons of the 1930s, outside the Disney and Fleischer Studios. The Scrappy series, for example, employed exaggerated, abstract character designs and stories that involved unique personalities. The character of Scrappy, created by Dick Huemer, became an overnight success with a popularity surpassed only by Mickey Mouse.

By the late 1930s, however, things began to change. Huemer had long-since departed, Scrappy and the long-running Krazy Kat series were both fading in popularity, Disney's "Snow White" appeared in theaters, and a newer, zanier approach to animation was being developed at Warner Bros. Then, in 1939, Mintz became indebted to Columbia and lost his studio to them, and died by the end of the year.

Following the death of Mintz, his production manager, Jimmy Bronis, became his successor. After Bronis came Mintz's brother-in-law, George Winkler. Meanwhile, the studio was scrambling for a new star, as Scrappy was being phased out around this time. Later, Columbia got rid of Winkler and brought in former Disney storyman and Warner Bros. cartoon director, Frank Tashlin. Under Tashlin, the studio experienced a considerable talent boom. Many of the studio staffers were former Disney employees, fresh off the picket line from the 1941 strike at that studio, leaving Tashlin with a lineup of talent including John Hubley, Zack Schwartz, Emery Hawkins, Ray Patterson, Phil Duncan and Louie Schmitt. The drive to experiment and employ new, innovative ideas was strong and led to the emergence of a handful of highly-stylized cartoons as well as the successful The Fox and the Crow series, pitting a refined, sophisticated Fox against a chiseling, street-wise Crow. Unfortunately, Tashlin's stay was short-lived and he was replaced by Dave Fleischer. Fleischer too would depart and his other successors would make little impact on the studio. The quality of the cartoons, meanwhile, began to deteriorate and finally, in 1946, Screen Gems closed. However, they had produced enough cartoons to be released through 1949.

The void left by the closure of Screen Gems was filled by "United Productions of America" or UPA. This occurred when Steve Bosustow and his creative staff, including many alumni of Tashlin's avant-garde ensemble at Screen Gems, approached the studio. In 1948, Columbia tentatively agreed to distribute UPA's theatrical shorts, a decision that would quickly prove to be the studio's wisest, animation-wise. Throughout the late 1940s and the 1950s, UPA would earn several Academy Awards and nominations for the fruits of their efforts. In the process, they brought to the screen such endearing characters as the nearsighted Mr. Magoo (voiced by Jim Backus) and Gerald McBoing-Boing. In 1959, however, UPA ceased production of theatrical cartoon shorts and Bosustow ended up selling the studio to Henry G. Saperstein. After a brief distribution deal with "Hanna-Barbera" in the 1960's, which was mostly involved in Television, the era of classic animation at Columbia came to a close in 1967.

, and a definitive history of the studio was compiled into a book in 2012.

The Screen Gems name would later be reused by Columbia in several fields- it was the name of their TV production firm from 1948 to 1974; their 1965 logo became infamously known as the "S from Hell". Columbia revived the name again in 1999 for genre films and continues in that capacity. The studio itself would later receive several successor firms, including Adelaide Productions (which mainly handled 2D animated series, often based around Columbia and TriStar Pictures movies), and Sony Pictures Animation, which mainly makes 3D animated movies.