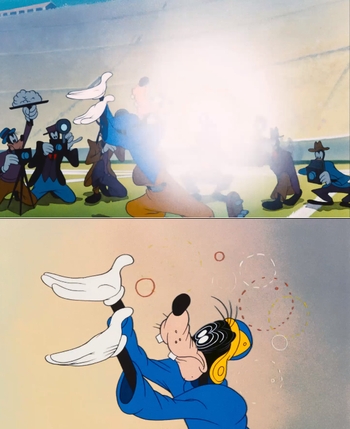 A person uses a camera and takes a photo...and the flash wasn't off. The resulting flash either blinds the unfortunate recipient of said photo or makes him see spots. This can be used as a handy distraction or even as a nasty form of Improvised Weapon. Truth in Television, as anyone who's ever had to take a school photo or have been at an area with a lot of flash photography can attest.

Sub-Trope of Blinded by the Light. Compare Weaponized Camera where this effect may be exploited in a combat situation. See also Epileptic Flashing Lights, in which multiple, quick, successive flashes are used to disorient.